The Fourth Estate is the term used to describe the media in America and is seen as an essential element of a free society. Some, primarily conservatives, have questioned what becomes of America if the Fourth Estate doesnât embrace the importance of doing its job according to the highest standards of journalism?

Throughout most of the pandemic, the media compliantly accepted the World Health Organizationâs claim that COVID-19 originated with a bat from a wet market. Editors and producers of news programs didnât seem to find a story about the origin of the pandemic mildly interesting? 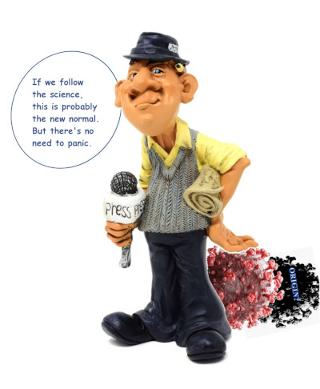 MediaCollege.com lists five key factors to gauge when considering whether a story is newsworthy:

Timeliness refers to the temporal currency of a story. In other words, itâs not a story that happened in the past and that doesnât matter anymore. The pandemic is clearly the biggest story of 2020 and 2021 so far.
Significance refers to the number of people affected by a story. Itâs doubtful that any story in the history of the planet has affected more people.

Proximity refers to the geography of a story. Where did it occur in relation to the readership and viewers of news programming? With a global pandemic, COVID-19 fit the proximity of newsworthiness no matter where someone lived. It would be difficult to find a spot that wasnât affected by the coronavirus. If there was, that would make for quite a story in itself.

Prominence refers to the public stature of those affected. If it affects Hollywood stars, pro athletes, elected officials, such as the president, it has âprominence.â

Was anyone not affected by the pandemic? Does any story have more human interest than a story about nearly 4 million people dying around the globe? Does anyone not know someone who had the disease or died from COVID?

According to the five points of newsworthiness, COVID-19 rings the bell with each. Would people take an interest in where the disease came from? Any news editor or publisher would have to find this a viable story. And yet the media ignored the story for an entire year. Anyone who suggested the virus may have come from a laboratory in Wuhan, China, was ridiculed and then ignored.

Those who accuse the media of bias have faced derision. The question, however, is how can the media look the public in the face after demonstrating such a glaring lack of interest in the story of the Century? Itâs equally questionable how members of the media can look themselves in the face when passing a mirror.