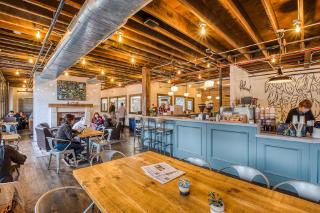 âWe spent an entire year coming in every morning trying to reinvent our business to survive,â said Michael Ervin, who owns Ethereal Confections with sister, Mary Ervin, and their partner, Sara Miller. âNot to grow but to survive.â

That was during the pandemic. Prior to that, Ethereal Confections, the confectionary and more, was growing exponentially.

The store, which Michael Ervin described as a company providing âfood-based experiences including the cafÃ©, the Speakeasy (in the basement), the event space (upstairs), our pairings, and our bean-to-bar chocolate,â started with 400-square feet next to the Woodstock Theater in January of 2011. In 2013, they moved to a 3,000-square-foot location in the Southeast corner of The Square. In October of 2019, they moved to their current 10,000-square-foot location at 140 Cass Street, just off the Northwest corner of The Square.

While Michael said that it was exhausting to survive the pandemic, he also said they were very fortunate. âA typical restaurant â¦ if people donât walk in the door, they donât make money.â But Ethereal is more than just the physical location on the corner of Benton and Throop Street.

âItâs not apparent walking into Ethereal how many other businesses that we touch,â he said. âFrankly, thatâs how we survived.â 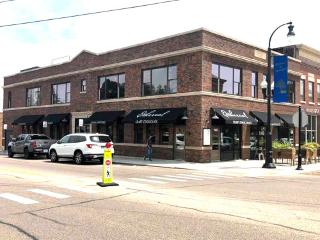 The other businesses they touch include approximately 150 breweries around the U.S. and Canada that use ingredients from Ethereal. The distilleries use Etherealâs chocolate nibs in the brewing process. Other ingredients are used to make porters and stouts. They also have customers in Canada and Europe and have sold their chocolates in Asia.

They come to Ethereal âbased on our sourcing and our quality products,â he said, âethical sourcing and really good flavor.â

The chocolate they offer is so exceptional because of the talent of those working in their chocolate kitchen, and also because of a commitment to quality through the entire process. Michael and Mary have traveled to South America, Africa and Haiti, as well as other countries, to buy their cocoa beans directly from preferred growers.

While the diversity of products and services they offer went a long way to helping them survive the pandemic, Michael also expressed gratitude to others.

âIâm appreciative of the customers, the support of the government and the city [of Woodstock] for working with us,â he said.

However, he said there are some who donât feel comfortable coming out yet and it will take a couple years to really get back to the growth phase they were experiencing before COVID-19.

âWe just started to realize the money that matches the investment when COVID hit,â he said. âWe had moved into a bigger space and expected to grow significantly. Michael said that, while they conduct business around the country and globe, âWe work and live here. Weâre trying to help make the community a better place.

âWeâre not a charity, but we know we can do good by the decisions we make as a business.â