Juneteenth is Americaâs holiday, if we choose to make it so 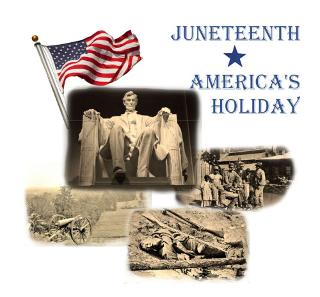 June 18, President Joe Biden signed a bill making June 19th a national holiday known as Juneteenth honoring the day in 1865 when slaves in Texas learned that they were free. This is a holiday all freedom-loving Americans can and should celebrate. And considering the price America paid in the Civil War deciding the issue of slavery, it is truly a national holiday.

Many on the Left see this as a victory complementing their push to characterize America as âsystemically racistâ and whites as bearing racial guilt. It fits with Critical Race Theory and the narrative that America was founded on the principles of racism rather than liberty. But, for anyone willing to pay attention, it actually does the opposite.

Overwhelmingly, those who died in the war were white males. The Congress that voted for the 13th Amendment was comprised almost exclusively of white men. The Congress that approved the 14th and 15th Amendments (making everyone born in the U.S. a naturalized citizen and granting the right to vote to black men, respectively) was also almost exclusively comprised of white men.

This doesnât absolve America of her guilt of slavery or racism. But it is deeply disingenuous to hold slavery and racism up as evidence of Americaâs guilt without also presenting the other side of the story. Should we condemn those who fought, including those who died, fighting in the war that ended slavery as equally guilty? Should we similarly condemn their children and their childrenâs children?

The idea that racism is wrong is a concept fought over and handed down from generation to generation of Americans. It wasnât discovered or invented by the proponents of Critical Race Theory. That America would willingly accept the struggle over racism is undeniable evidence that America has a conscience. Historically, this is not such a common thing for a nation to exhibit.

As part of Critical Race Theory, young, white Americans are told that they bear âwhite privilegeâ and âwhite guilt.â Young blacks and other minorities are told that they are victims, oppressed by white oppressors. In the process, they are absolved, to the degree that a society and government can do so, of responsibility for their actions. Itâs not their fault. Both are harmed by these perspectives.