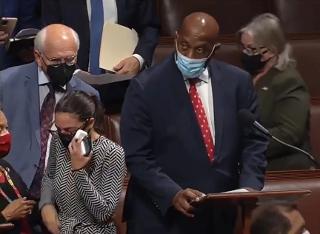 Funding for Israelâs defensive âIron Domeâ system met with opposition from nine members of the U.S. House of Representatives. The system protects Israelis from missiles frequently fired into the country from neighboring territory, particularly Palestine.

The bill passed 420-9 indicating that most of the Democrats did not go along with the effort. The bill was designed to provide short-term emergency funding for the U.S. government to avoid a shutdown and initially included funding for Israel's Iron Dome. But that part of the bill was pulled due to the opposition from The Squad and a few others. Democrats could only afford to lose three votes since Republicans refused to vote on the bill due to its inclusion of a debt ceiling increase.

The Republican who voted against funding the Iron Dome indicated that he did so strictly for fiscal reasons. "âMy position on âno foreign aidâ might sound extreme to some, but I think itâs extreme to bankrupt our country and put future generations of Americans in hock to our creditors," said Massie.

The opposition from to the funding from The Squad and a few other Democrats has been characterized as indicative of antisemitism. Tliab said, âWe cannot â¦ be talking only about Israelisâ need for safety at a time when Palestinians are living under a violent apartheid system.â

Fellow Democrat Ted Deutch of Florida objected strenuously to Tlaibâs language. âI cannot allow one of my collegues to stand on the floor of the House of Representatives and label the Jewish democratic state of Israel an apartheid state,â he said.

House Minority Leader Kevin McCarthy (R-CA) was quoted in the same story as saying, âDemocrats just pulled funding from the Iron Dome â the missile defense system that has saved countless lives in Israel from Hamasâ rocket attacks. While Dems capitulate to antisemitic influence of their radical members, Republicans will always stand with Israel.â

On Friday morning, FOX News reported that it appeared AOC was âconsoled by fellow members on the House floor Thursday after the effort to stop funding for Israelâs Iron Dome failed. The story indicated that AOC was huddling with Democrat allies and, along with crying, was speaking in an animated fashion.