Biden keeps passing the buck as he endlessly assigns blame 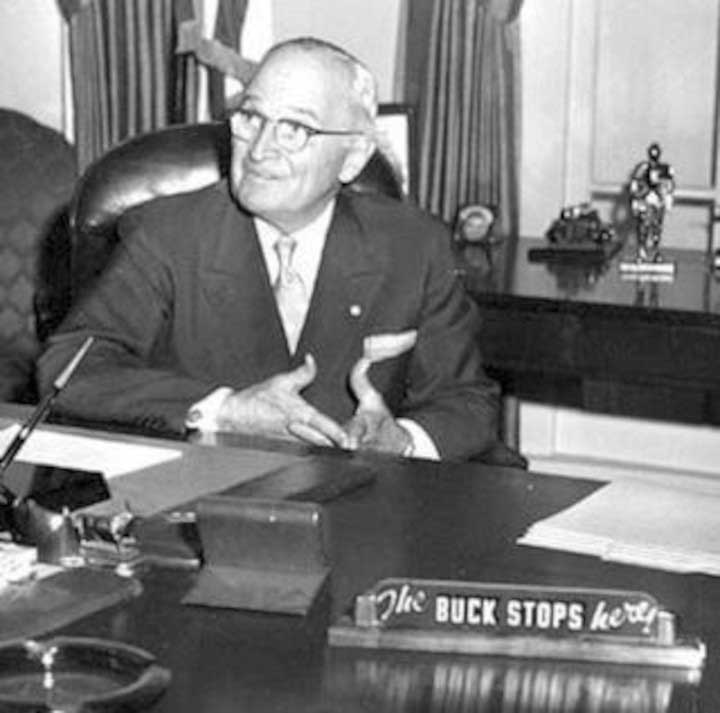 Harry Truman, president of the United States from 1945 to 1953, had a sign on his desk that read, âThe Buck Stops Here.â It meant that he would take responsibility; he wouldnât pass the buck.â But now with Joe Biden in the White House, it appears that the buck stops anywhere but âhere.â

The walls are crashing in on Biden, and America, from every direction. Yet, somehow, heâs not to blame for any of the calamities whirling around his administration. Consider his response to the following crisis:

The Botched Withdrawal from Afghanistan: Biden has blamed former President Donald Trump, the Afghan Army, Afghan leaders and the U.S. military. Heâs also blamed Americans who didnât take the âsubtle hintâ and get out of the country earlier.

In the meantime, Biden has claimed that he was always against the war, completely ignoring the fact that, in 2001, he voted in favor of the war.

The Border Crisis: While repeatedly trying to claim that there is no crisis at the border, he has still managed to blame Trump for "the crisis that doesnât exist." Heâs also blamed the legacy media for not adequately carrying his water, the way they usually do. He adamantly claims that the massive influx of illegal aliens at our border has nothing to do with these people listening to his open-border rhetoric during the campaign and since.

The Crime Wave: Smash-and-grab has become common terminology among Americans as our cities have gone from Leftist-approved riots to gangs of young Americans smashing windows and display cases while making off with hundreds of thousands of dollars of merchandise. Biden blames the problem on guns and COVID.

Never mind that the cities seeing these rampant instances of crime are led by George Soros-financed states attorneys who support defunding the police and catch-and-release, no-bail policies. In some of these cities, police wonât even arrest people for thefts of merchandise valued under $900. Thees policies are an open invitation to crime and yet Biden and his party canât seem to see it.

The Kyle Rittenhouse Murder Trial: Biden has claimed that 17-year-old Rittenhouse was a âWhite Supremacistâ and a member of a militia. As he was acquitted, it was abundantly proven that Rittenhouse is neither.

Biden has also blamed Trump for self-defense shootings that left two people dead. Biden claimed that Trump has never denounced white supremacy even once. The statement is completely false. Witness Trumpâs statement about the riots in Kenosha, Wi: âWe condemn in the strongest possible terms this egregious display of hatred, bigotry and violence. It has no place in America.â

The Continuing Pandemic: During the 2020 campaign, Biden promised: âIâm going to shut down the virus.â But, as the virus lingers, and lingers, with mandates he promised never to impose, Biden is quick to blame Trump (again) as well as people who havenât gotten âthe jab.â

âWeâve been patient, but our patience is wearing thin,â Biden said of the unvaccinated. âAnd your refusal has cost all of us.â

Parents Protesting at School Board Meetings: When parents have shown up at school board meetings protesting the teaching of radical racial education such as Critical Race Theory, gender neutral bathrooms, and masking and vaccine mandates, Biden has blamed the parents. Heâs also blamed âWhite Supremacyâ and, of course, Trump.

Biden went as far as to have his Attorney General, Merrick Garland, declare these parents âDomestic Terroristsâ which is a legal definition that gives the Department of Justice and national security agencies the power to spy on private communications of the parents.

Inflation: Inflation has reached 40-year highs. Just today, it was reported that the average American family is spending $3,500 more this year due to inflation. Biden has quickly blamed that on Trump, as well as âpeople buying too much stuffâ. It seems he may not have considered the implications of what happens to the economy when people stop âbuying stuffâ.

Gas Prices: Along with inflation, Biden has responded to increases in the price of gasoline at the pumps by blaming âgreedy oil company executives.' and has told the Federal Trade Commission to âbring all of the Commissionâs tools to bear if you uncover any wrongdoing.â

In other words, the increase in the price of oil has nothing to do with Biden abandoning Americaâs long-sought-after energy independence; itâs all about corporate greed and OPECâs failure to properly respond when Biden begged them to increase oil production.

The Supply Chain Crisis: While the pandemic certainly has a lot to do with the supply chain crisis as Chinese production is way down from their lockdown, Biden is quick to blame others for this problem, too.

He has blamed the shippers and he has blamed the truckers (ignoring Californiaâs 2019 A.B.5 law that bans independent owners/operators in the state). He has also blamed âconsumers â¦ for wanting things they donât really need.â

Failure of his Build Back Better Bill: Here, Biden has switched back and forth between pandering and blame. One day he is blaming Sen. Joe Manchin (D-WV) and Sen. Kyrsten Sinema (D-AZ) for failing to support his radical socialist bill that, in spite of his claim that it will cost nothing, is reported to cost more than $4 trillion. Then the next day he is schmoozing them trying to get them onboard.

And while he is pushing the radical spending bill, heâs already ignoring the inflationary effects of government spending.

Bidenâs Sagging Poll Numbers: When it comes to Bidenâs awful polling results -no surprise - heâs quick to blame Trump yet again. But he also blames the pandemic and the unvaccinated and his lap-dog media. In other words, thereâs no problem with the direction America is heading today. Itâs just a question of the media not doing enough to cover his back.

Heâs even told the media that they need to do a better job of supporting him and, no surprise, the media responded by falling in line with his demand.

The only question now is - who he will blame when Republicans take back the House and Senate in 2022? Of course, we could make some solid guesses already.