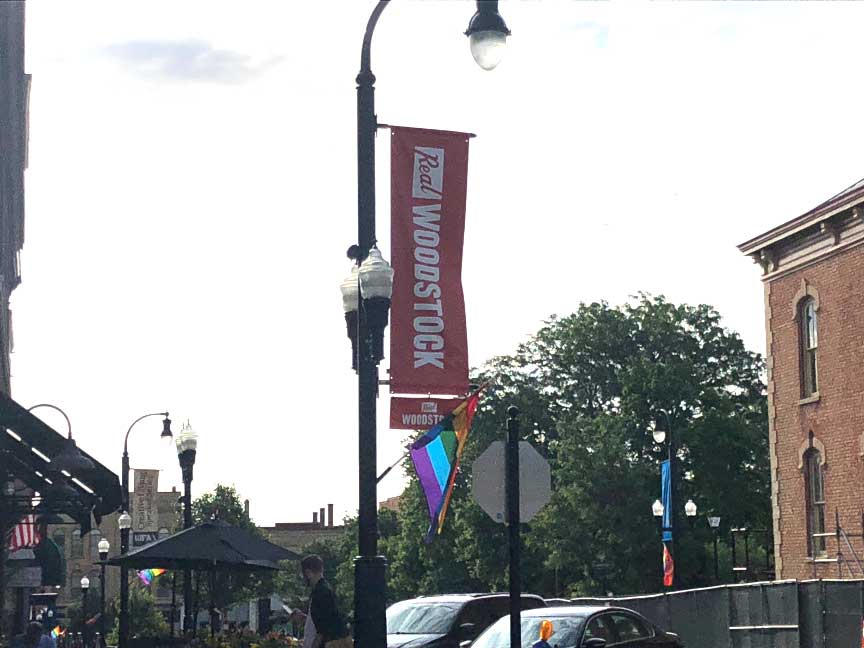 Iâm perfectly positioned to earn my points for virtue signaling. Outside, The Woodstock Square is adorned with rainbows everywhere. The marchers will turn out soon and, just as soon, weâll have folks with tie-dyed rainbow hair and all manner of colorful attire and adornments. If we watch close enough, we may even see toddlers in drag.

Of course, itâs not lost on me that the City of Woodstock purchased an abundance of rainbow flags and had city workers install them around The Square in their taxpayer-funded contribution to the event. Seems the city didnât want to wait until the last moment to virtue signal.

If I sound like a wet blanket, itâs not that Iâm filled with hate or rage. Iâm not someone who would do anything other than a little rain dance to interfere with the rights of people to parade and celebrate in their own way.

For instance, earlier today, I heard that 31 men were arrested in Idaho for conspiracy to cause a riot during the Gay Parade in Coeur d'Alene, Idaho. I have no idea what they were thinking or what they thought they would accomplish. If they were successful, it seems the best they could have hoped for was giving the Leftist media ammunition to attack those who donât virtue signal. Of course, even as they failed, they managed to do that.

As for me, Iâll sit quietly working (on other stuff when Iâm done with this) while celebrants will, no doubt, be all around me today. If pressed, I expect to have some polite conversations and thatâs about it, though I donât expect anyone to press me.

I support liberty and that includes the liberty of people to live their lives as they choose, even though I may find their way embarrassing and a contradiction to reality. As Iâve said before, no one owes their existence to the LGBTQ lifestyle while we all owe our existence to heterosexual interactions, meaning that the latter deserves a little more respect in my eyes. I just donât understand why the LGBTQ movement seems intent on forcing silence onto those who disagree with them.

Thereâs no doubt that, posted in certain places, this column will elicit an avalanche of hate mail from the LGBTQers and their virtue-signaling supporters. I know this because Iâve dared to share my opinion before and it has always received an avalanche of hate.

Hate, in this context, is a funny word. The other day, I saw a lady with a rainbow shirt and the words âELIMINATE HATE!â printed on the front. I think that explains what the LGBTQ community is seeking (though I also think they are pawns of the socialists). I suspect it answers my question to the LGBTQ promotion commercial I saw on television the other day.

A young man, with the uniform of tie-dyed rainbow hair was telling viewers that, in the name of LGBTQ, they had to keep fighting if they wanted change and progress. I found myself wondering, âWhat more do they want?â I think the ladyâs shirt helps to explain what they want. But that brings up a couple questions for someone like me, someone who dares to ask questions even when itâs politically incorrect to do so: how do we define hate and how will we go about eliminating it.

The Left is big on defining things to fit their agenda. For instance, an unborn child is defined as a 'fetusâ to make it more palatable to allow abortion, which is euphemistically called a âChoice.â In the case of LGBTQ, it seems theyâve defined hate as failing to become an activist for their cause.

As for eliminating hate, what do they intend to do with the people, such as myself, who refuse to go along? Will we make âhateâ illegal someday? We already have âhate crimes.â Canât they be expanded a little?

Youâll have to excuse me; while others may want to virtue signal today, I feel another rain dance coming on.