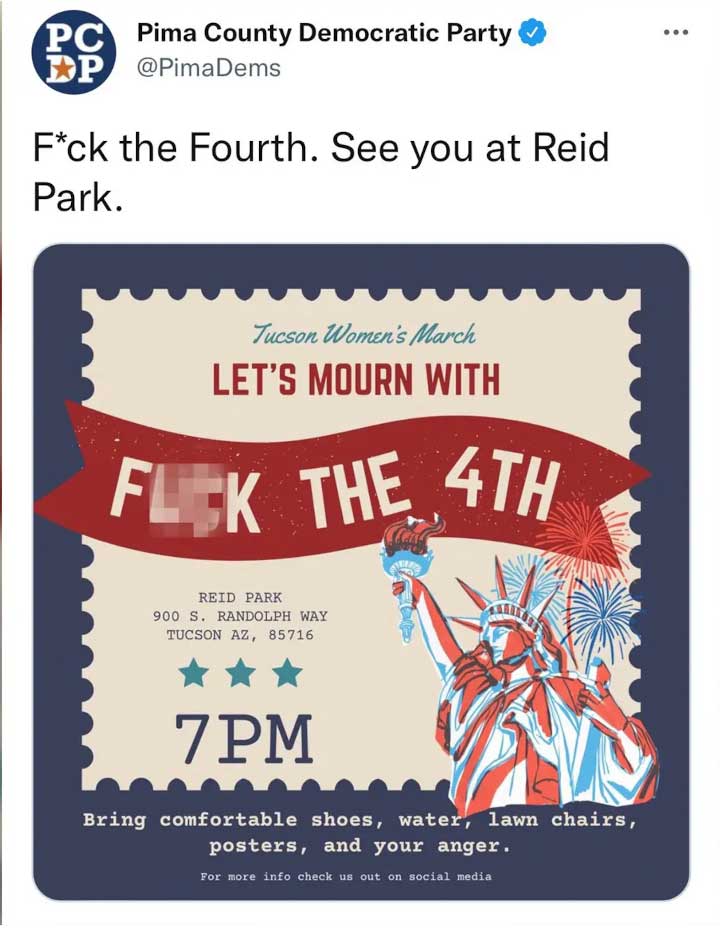 Itâs no secret that the Left despises America. From the 1619 Project, to BLM, to radical-socialist-anarchist books by Howard Zinn in our classrooms, Leftists constantly scream their hatred for this country. But, with this 4th of July, even their customarily unhinged loathing for the United States pales by comparison as Democrats in Arizona are holding a âFâk the Fourthâ rally.

What has heightened their radical vitriol? When the Supreme Court reversed Roe v Wade, in the prior words of Senate Majority Leader Chuck Schumer, the Court has âreleased the whirlwind and â¦ will pay the price.â Never mind that the Courtâs ruling didnât ban a single abortion but only put the question back in the hands of the states. But when Democrats, the self-professed party of âlove,â hates, it does so with an unparalleled fervor.

This latest example of anti-American venom is further evidence of what happens when Americans are indoctrinated with a one-sided view of history and reality. Speak to young people today about racism, gender roles, climate change or other Leftist trigger issues and, in most cases, youâll have the sensation of walking into a wall. They are utterly lacking in flexibility.

Thereâs nothing wrong with having strong opinions about issues. But are you willing to accept challenges to those opinions? Not only does the Left reject challenges to their positions; they reject the right of others to have them.

Challenge the Left on their position on racism and, rather than an open debate, you meet Cancel Culture. How did it pass that a substantial portion of this country has rejected the idea of questioning certain issues?

The reality is that, when one is afraid to accept challenges to their opinions, they know that their positions have foundations built on quicksand. If they had the courage of their convictions, not only would they accept challenges; they would welcome and embrace them.

Letâs suppose that youâre pretty sure about something. How will you confirm your hypothesis? Youâll challenge it, even if only in your mind. Is it true and can you prove it? But, if you tell yourself to believe something, and then refuse to consider the validity of your position any further, what have you proven?

Youâve proven that you fear the challenge because it might force you to accept the idea that you were wrong â that the position youâve chosen is false. And, if you choose positions based on something other than a fearless pursuit of the truth, the next question is âWhy?â

If the truth is that America is simply systematically racist, if Iâm fearlessly determined to see the truth, Iâll have to accept that idea. But, regardless of the Cancel Culture, Iâve insisted on taking up the challenge to that question.

I realize that America has blemishes in its past. Slavery is one such example. But I also realize that we donât have slavery today because the white men who the Left castigates with unlimited depths of guilt, also fought a bloody war to end slavery in this country. Even those who fought for slavery died in vast numbers to support a position I find reprehensible.

The irony is that, in America, a group of socialist Democrats only have the right to throw a âFâk the Fourthâ party because this country is based on the free speech the same people constantly seek to deny those who dare to disagree with them. In other words, they have to thank the 4th of July for the right to say something so mindlessly ignorant.