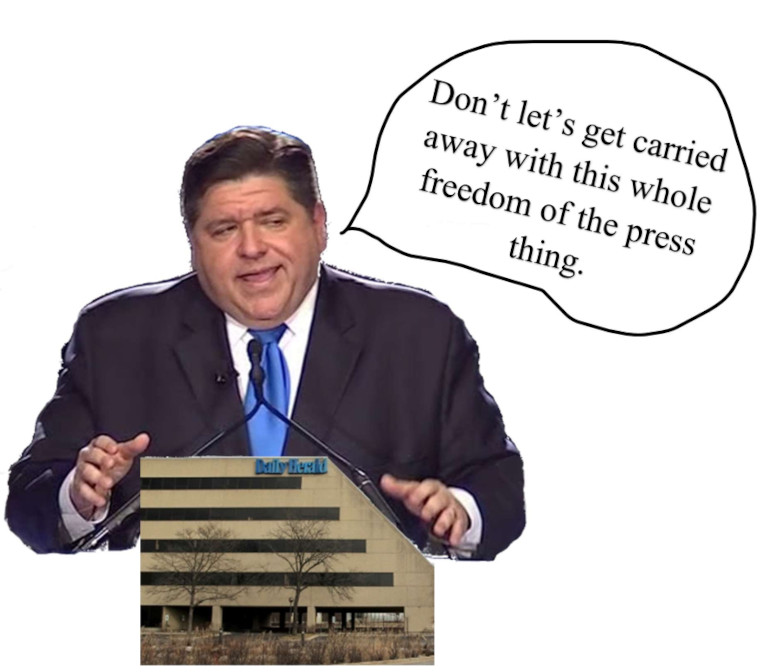 With the November 8 election drawing near, incumbent Gov. JB Pritzker would prefer to see glowing stories in the news about what a wonderful job heâs doing and heâs not very tolerant of those who dare to criticize. When publisher Local Government Information Services (LGIS) began running articles critical of his performance, he responded by throwing his substantial weight around.

Pritzker discovered that the 36 editions published in affiliation with LGIS were printed on contract with Paddock Publications (owner of the Daily Herald), Pritzker decided to put an end to that right now, much the way he dictatorially shutdown the state and required masks. His campaign manager, Mike Ollen, sent a letter to the Daily Herald demanding that they cease printing the publications.

The apparent weight behind the demand came with a threat to pull out of a debate with his Republican opponent, Dan Bailey. The debate was/is to be sponsored by The Daily Herald and Associated Press Media Editors. The Daily Herald caved.

The Daily Herald published a letter apologizing for having printed the LGIS publications( see link below). The letter speaks of the importance of perception. âThe company does not endorse the content of any of the print jobs it does for customers, including many newspapers.â

Dan Craven, president of the Illinois Press Association, is quoted in the Sept. 17 Shaw Local article as saying, âAll we can do is point out to people that those publications are not what they may appear to be.â They appear to be newspapers. Who is Craven to say that theyâre not. (Craven did not reply to calls from McHenry County Response).

While the Shaw Local story acknowledges that publishers like LGIS see themselves as the âreal media watchdog(s),â Chicago Journal does a fine job of providing evidence of the kind of bias in the media that has inspired opposing view publications, such as those associated with LGIS.

The Chicago Journal article tells readers that, âThe state of Illinois has guidelines for what qualifies as a newspaper for the purpose of publishing legal notices, etc., and state law requires that a newspaper must print at least once per week, for at least 50 weeks per year â¦ to qualify as a newspaper.â

Any actual requirements would pertain to postal rates and, possibly, to tax rates. In fact, the state doesnât get to decide what is or isnât a newspaper. And neither does Craven or the Illinois Press Association.

Shaw Local ran a quote from Pritzker where he unashamedly throws the race card around. The story quotes him saying the content in LGIS publications is ââcomplete hogwashâ centered around racist messaging (see link below).

ââItâs clearly all about the idea that â¦ Black people are threatening your way of life,â he said of the publications. âThatâs essentially what [Proft] is putting in these publications. Itâs a scare tactic. Itâs meant to have people concerned about their safety.ââ

Is that the measure of a newspaper â not making mistakes? If so, we have no newspapers in this country. Or is a lack of bias required before a publication can be called a newspaper? Once again, we are left high and dry.

Where this works in favor of the LGIS publications is that theyâre clear about who they are and where they stand. The Leftist media, including Shaw Local and Chicago Journal, hide behind a thinly veiled pretense that they are conducting honest journalism. Which then is more honest and forthright?

The âmediaâ needs to clean up its own house before it throws any stones at anyone. And the Daily Herald should have stood up to Pritzker.