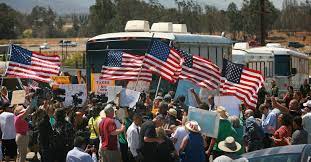 
These are some of the reactions weâve seen since Governors Ron DeSantis (FL) and Greg Abbott (TX) started shipping illegal aliens to Northern cities and states run by Democrat mayors and governors. The outrage is palatable: âHow could they!?â

Think about it: the president of the United States, Joe Biden, is ignoring federal immigration law. Heâs ignoring an invasion of illegal immigrants pouring over our Southern border! Hmmm.

While Abbott and DeSantis have shipped several thousand illegals up North, and while leaders of Blue government whine and complain, The Washington Times tells us that 1.3 million illegals have entered along the Southern border since Biden took office. Breitbart puts that number at closer to 5 million.

Whether The Washington Times or Breitbart is correct, one thing is crystal clear: several thousand is far short of the mass numbers of illegals entering the US from Mexico. And, whether theyâve stayed local and taxed the resources past the breaking point in those Southern states, or done so then passed through, Democrats in the North have nothing to complain about.

The idea that theyâre complaining about Abbott and DeSantis sending illegals North ignores the fact that the Biden administration has done the same in the wee hours of the night. Thatâs nothing to complain about but, if a couple Southern governors make a statement by shipping a some North, we should ignore the millions of illegals still in those border states.

What has the invasion meant for those Southern states? There, particularly along the border, residents have said they can't leave their homes without a weapon for self-defense. Hospitals and schools are overwhelmed by illegal immigrants, which is a heavy expense for local taxpayers.

In the meantime, the Biden administration is providing illegals with entitlements at taxpayer expense. According to AMAC, the average illegal immigrant household receives $24,721 in long-term government benefits.

What is clear is that, if anyone has a right to complain, itâs the Americans bearing the brunt of this assault along our Southern border. And sending a few busloads north is hardly the dastardly act Democrats and their media make it out to be.