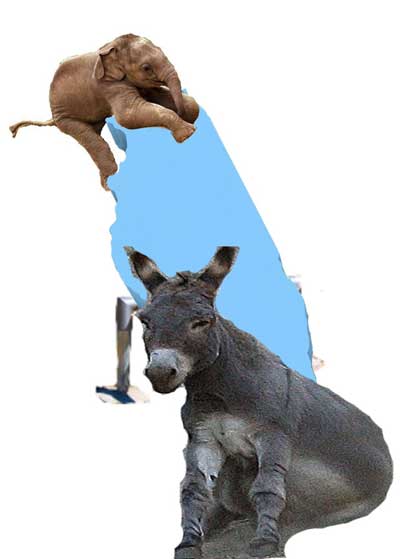 Thatâs what we have in this state â a political party so dominant that there seems to be little reason to bother with another party. This makes voting Democrat a pointless exercise and a waste of time. But, if you believe that other perspectives on governance should at least be considered, you might want to cast a vote for that other party â the Republicans.

Even if you donât agree with Republicans, isnât it better to have some kind of honest debate about the issues? And, if you consider the sorry state of affairs in Illinois, can you really say that Gov. JB Pritzker and the Democrats are doing a good job?

Pritzker has run Youtube ads ad nauseum bragging about balancing the state budget. But an honest appraisal of that braggadocio proves itâs hardly the case. Rather, the state hasnât done anything â NOT A SINGLE THING â to actually control out-of-control spending. The only way Pritzker can brag at all is because Joe Biden is in the White House, and has pushed federal bailouts for fiscally irresponsible blue states with incredible consistency.

In contrast, here in McHenry County we have Shannon Teresi, our current auditor, now running for Illinois Comptroller. Teresi is a Certified Fraud Examiner. Her Democrat opponent has no financial background, much less fraud examination background. Teresiâs opponent is noteworthy only as the kind of person the Democrats would most want in that office, since she is neither qualified nor inclined to scrutinize Illinois spending the way Teresi would.

And how about Darren Bailey? With a supermajority in the state legislature, would you rather give the Democrats control of the governorâs mansion too, or would it be better to have someone from the opposing party in that seat? There are plenty of reasons, straight up, to vote for Bailey. And a wealth of reasons to vote against "Illinois-Lockdown" Pritzker.

In the state legislature, do you really want an unchallenged Democrat party that can force through laws such as the Safe-T Act, that makes crime safer for criminals? Or would we be better served with a legislature where such ânovelâ legislation is actually questioned before the courts are pressured to turn 2nd Degree Murderers, Kidnappers and other violent offenders free without consequence?

The Safe-T Act, fiscal irresponsibility and corruption are only a few reasons why we should never accept a one-party system. There are many others. And it would be interesting to hear anyone give us a good reason why we should allow such a system.