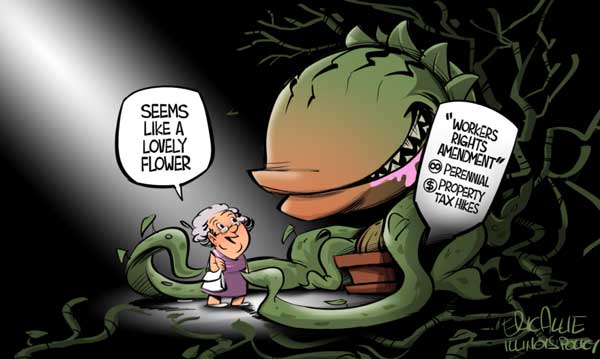 "The teachers unions should have a constitutional right to determine what children are taught."

Would you vote for that? Does that sound like a good idea to you? Or are you one of those "radical parents" â those who dare to speak out about what their children are taught â that the federal Justice Department has targeted?

So-called âWorkers Rightsâ Amendment #1 will give teachers unions unfettered power over what our children are taught.

Nov. 8, Illinoisians will go to the polls (if they havenât voted by mail already) where they will respond to this question: âIllinois Amendment 1, Right to Collective Bargaining Measure (2022).â If approved by voters, it will provide an absolute windfall of rights for public sector unions.

It will also end "Right To Work" in Illinois

While the term Collective Bargaining is actually in the name of the amendment, itâs advertised by SEIU and others as âThe Workers Rights Amendment.â Thatâs a great marketing term; who wouldnât vote for workers? But itâs also a lie.

Proponents of the bill, such as Robert Bruno, a labor professor at University of Illinois Urbana-Champaign, who is quoted on Ballotpediaâs consideration of the bill, claim that it will attract workers to the state. But itâs noteworthy that, while theyâre making that claim, many major corporations such as Downers Grove-based Tyson Foods have announced that they are leaving Illinois. Tyson is the sixth such corporation this year. What jobs will union members find when all the corporations are gone?

Other proponents claim that the amendment will drive inflation down. How they arrive at that assertion is a mystery. Those considering the measure more soberly recognize that higher wages tend to drive inflation up. And that inflation tends to erase the financial benefits of higher wages.

Those who are opposed to the amendment point out that it is estimated to increase taxes $2,149 per family per year. Illinois Review points out that public unions in Illinois âwould gain the nationâs most extreme, anti-taxpayer powersâ while âenshrine(ing) private sector workers' status as second-class citizens.â They also point out that Amendment 1âStrips lawmakers of their ability to pass important labor reforms.â Unions will be calling the shots.

At the same time, by blocking Right to Work, it âwill harm Illinoisâ competitiveness.â This is obvious to anyone with some business acumen, but not to career Democrats in Springfield.

Itâs noteworthy that there are two ways for an amendment to get on the ballot. One way is through petitions submitted by citizens of the state. The other is by legislative fiat. This amendment is on the ballot, not because the citizens of Illinois asked for it, but because a legislature dominated by a Democrat supermajority, and a radical Leftist governor, decided to put it there.

The reality is that, with a supermajority, Democrats could have applied it as a law without any serious opposition. But, by pushing it through as an amendment, future legislatures will only be able to change it with another amendment. In the meantime, if passed, public-sector unions will have Illinois constitutional rights that give them sweeping powers, including the rights of teachers unions to decide what children will be taught.