Youâre bribing me for my vote, with my own money, and you really think $50 will turn the trick? 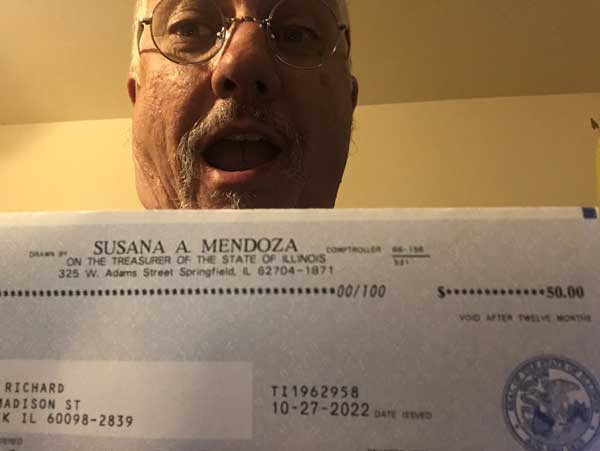 My Life-Changing Event!
I went to the mailbox Monday completely unaware that it would be an event to change everything. Until that moment, I had intended to vote for the party that isnât making crime safer for criminals. I intended to vote for the party that wasnât trying to end fossil fuels without a viable alternative, and in the process driving prices at the pump to painful levels.

I planned to vote for the party that believes America has as much right to secure its borders as any other country and that the government has a responsibility to do so, especially when drugs, sex traffickers, and terrorists are coming over with the crowd.

Thereâs no way that I would vote for the party that has returned us to 40-year record high inflation. I would have walked over hot coals before I voted for the party that pushed for defunding the police and, as is the case in Illinois come January 1, ending cash bail. I was inclined to vote for the side that has the backs of our police, rather than the side stabbing them in the back.

Why would I vote for a party that canât fix supply problems and on a level the U.S. has never seen before, that still canât get baby formula back on the shelves with consistency? What appeal is there to vote for the party that pulled the rearguard out of Afghanistan before the rear echelon thereby creating an embarrassing crisis that cost 13 US service members their lives?

There were desperate people in that country who depended on us. And I didnât like watching them fall to their deaths vainly and desperately trying to hold onto the skin of military jet transports as they flew into the stratosphere. Thereâs something wrong when that fatal attempt is more attractive than staying on the ground with the Taliban in charge.

And so, until Monday afternoon, there was no chance that I would vote for the Party of Biden, the Party of American Socialism, the Party of Equity beyond all reason and logic. But then I walked out to the mailbox.

You may have found yourself compelled to change your vote when you went to the mailbox recently, too, since you likely found the same motivation inside your mailbox.

Inside the box I found a letter from the State of Illinois, and a check signed by our State Comptroller. Apparently, the Postal Service is unable to send a wink and a nod through the mail. But the gestures were sufficiently implied.

The check is an obvious bribe eight days before the Midterm elections. A payoff sponsored by the supermajority Democrats and their flatulent governor, and signed by their pliant and unqualified comptroller.

Yes, itâs amazing to think that they believe they can buy the votes of taxpayers, especially while using taxpayer dollars to do so. But whatâs really amazing is that they think people in Illinois would sell their votes for a measly $50.